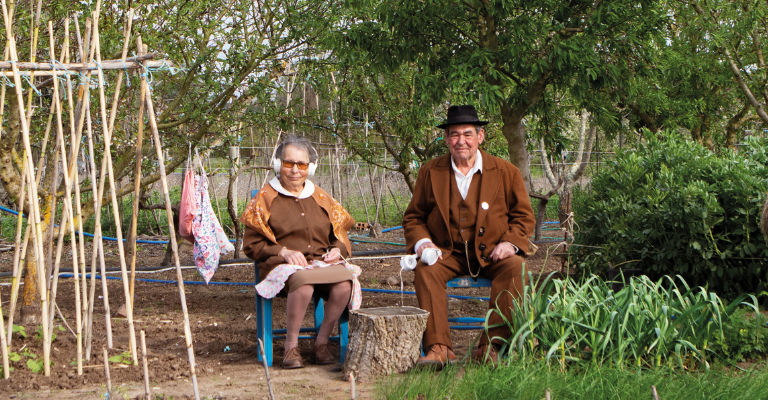 This annual event embraces cultural challenges through the presentation of national and international events of various contemporary expressions, marrying together tradition and innovation. 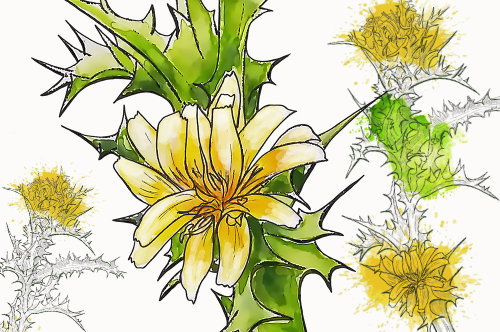 The students from Escola EB 2,3/S José Gomes Ferreira join the Giacometti Festival by participating in the Drawing Workshop conducted by Rita Cortês. Specialized in Scientific Illustration, recent winner of the International Prize of Scientific Illustration and of Natureza Illustraciência, she will share her knowledge and professional experience with students from the 6ºC, the 8ºC and some from the EEspecial.

This workshop is the result of a partnership between Ferreira do Alentejo's School Group and the National Arts Plan. 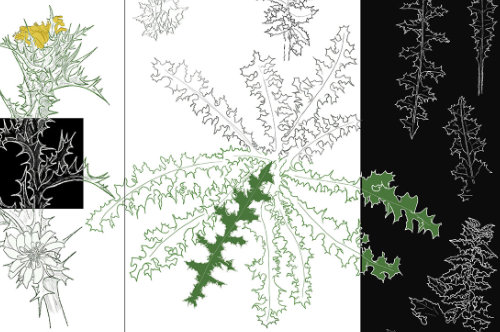 Edible plants that heal us

Discover the medicinal and gastronomic properties of the wild field plants that grow in the municipality of Ferreira do Alentejo! 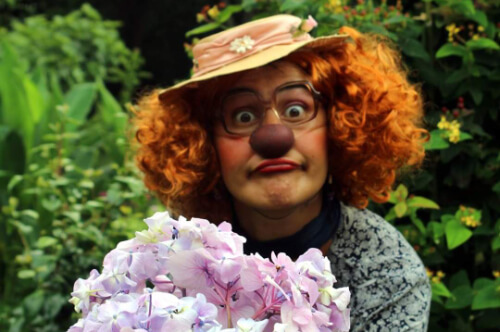 Pimpinella is a traveling florist. Passionate about songs and flowers, she meets the public on the street, aboard her cart: a musical garden!

Appealing to the sensorial world, Pimpinella uses different objects that sometimes perfume the air, sometimes bring sweetness to those who pass by her.
Composing verses from texts collected in Jorge Sousa Braga's "Herbário", Pimpinella makes us dive with humour into the world of plants, evoking popular songs that refer to the universe of medicinal plants and flowers accompanied by her accordion or her musical bells.

Specialist in the art of improvisation, Eva Ribeiro, plays throughout the show with the elements she finds along her way, conquering her audience wherever she goes. 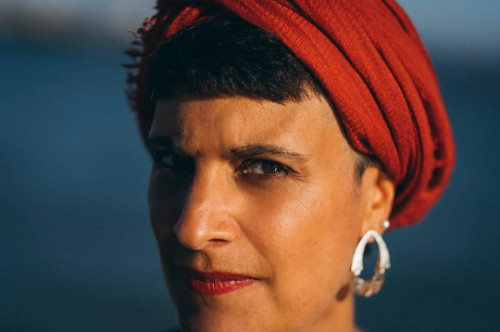 Chants, water, flowers, leaves, earth, seeds, animals, utensils, fabrics... From the living memory, recorded and offered by nature, this transdisciplinary work is made in homage to Michel Giacometti and the people of Alentejo.

In the hinge of artistic experimentation and popular tradition, opening an involvement with the local population, the instrumental performance (violin and violet solo) uses new technologies (computer, field recordings, video), drawing the tracks of something that, like time, is ephemeral. 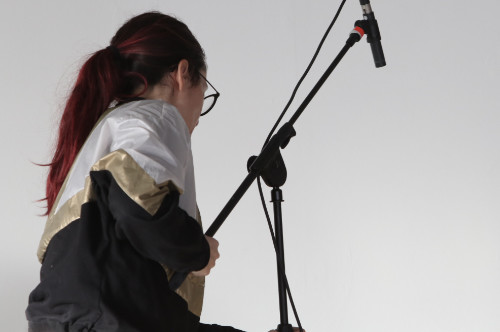 The composer, sound artist, music producer and higher education teacher, Süse Ribeiro, comes to share the latest sound technologies, her professional methodologies and various electronic equipment with the audience that lives and breathes in the world of music and technology.
‍
Open for 15 participants:
inscrever@festivalgiacometti.pt 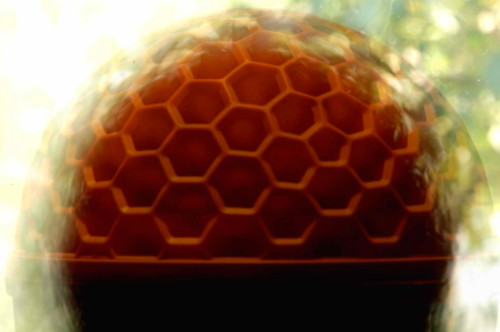 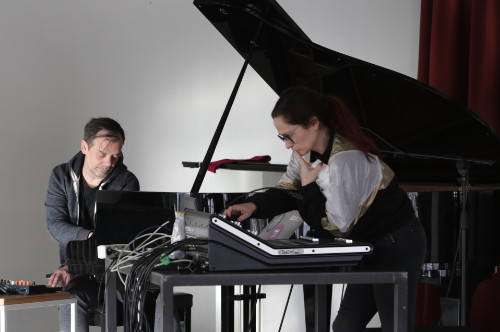 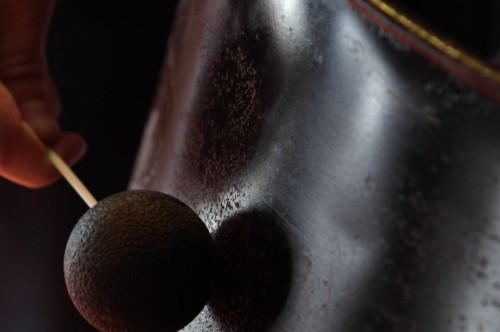 The performativity of real-time improvisation by Süse Ribeiro, Rui Rodrigues and Vítor Rua together with the specific sound spatialisation defines this ensemble of composers and musicians coming to the Núcleo de Arte Sacra de Ferreira do Alentejo. 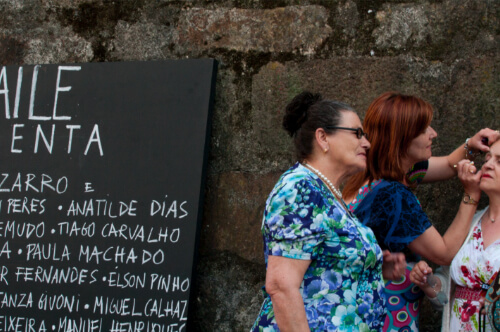 O Baile is a dance project based on the film The Ball (1983), directed by Ettore Scola, which includes participants from the community who, together with a team of professional dancers and musicians, are in charge of the show's interpretation in the fields of music and dance.

As in the original play, the project participants recreate a ball, dancing, playing music, and talking about their lives, often describing them with a lot of humour, in this case, the focus is on Ferreira do Alentejo. 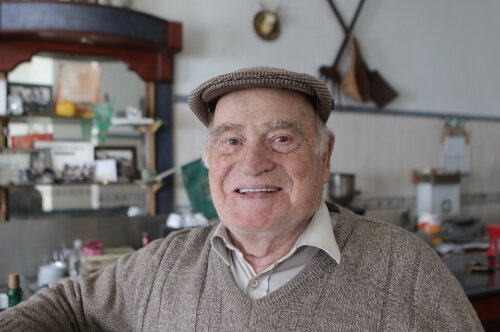 with singer João Lota and guests

João Lota is a singer from the Choral and Ethnographic Group "Os Trabalhadores" from Ferreira do Alentejo, founded in 1947, which has an impressive history. June 3, 2022 is his 85th birthday and we will celebrate with him and listen to his Cante of ancient timbre and modulation. 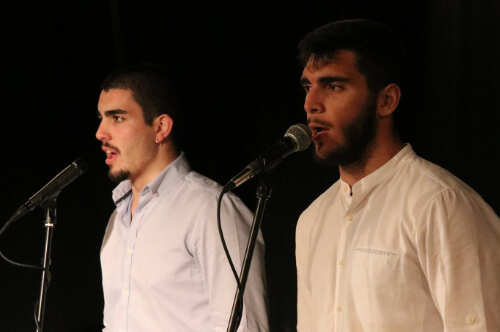 This trio of the new Cante alentejano of Ferreirense origin, performs for the first time in the Casa do Vinho e do Cante, once the Adega do Zé Lelito where many singers passed at a time when agricultural machinery was not seen in the fields and musician-ethnologists were unknown. 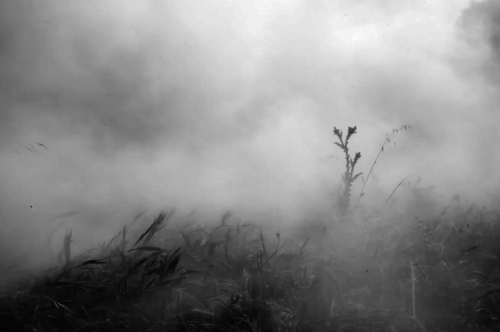 A work in direct reference to the music-ethnology work of Michel Giacometti, with footage shot in the municipality of Ferreira do Alentejo. Smoke. Earth. Flesh. An ancient Cante, machines and landscapes of the present. We hover between archetypes that inhabit the unconscious of the territory in diastasis. 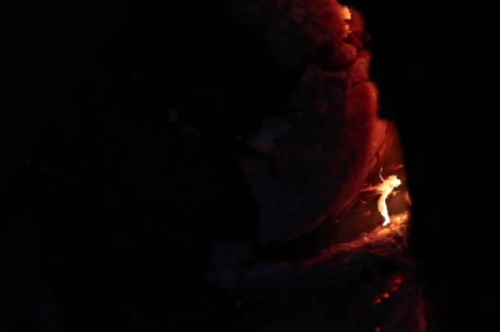 The opening of the installation originated from the collective performance of the EME ensemble begins with the launch ceremony and presentation of the Atmus label, a project financed by Programa Garantir Cultura. 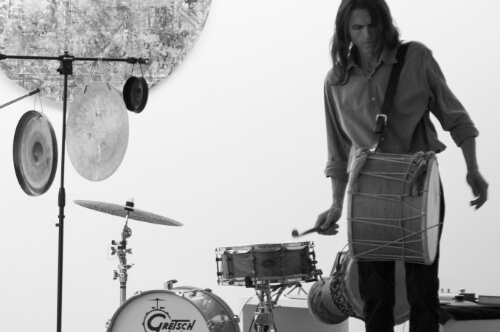 In the context of questions related to the origins of human culture, this seminar addresses musical linguistics, the dramaturgy of music, the building blocks of sonic narratives, the design of a composition as a way of telling a story, improvisation and artistic creation as a means of participation-intervention in public affairs. 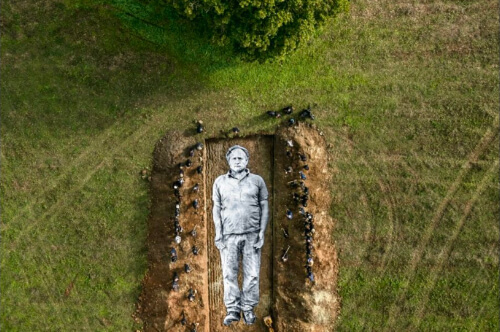 A cinematic action by JR and Alice Rohrwacher together with the inhabitants of the Alfina plateau, in october 2019.

Who looks at the peasants? Who sees them? Small as seeds, giant as seeds, so this cinematic action throws them to the earth. 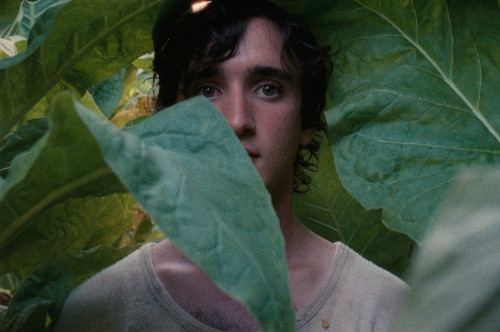 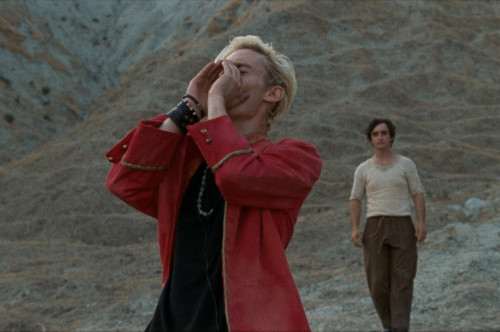 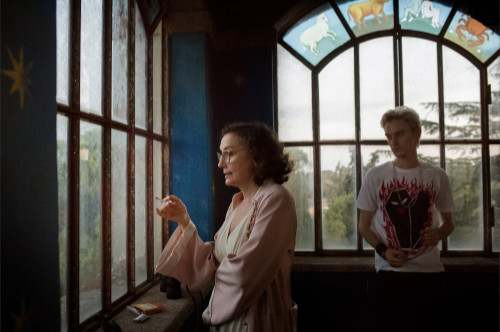 Film by Alice Rohrwacher
Cinema with the presence of the director

In a place lost among the arid mountains, beyond a river crossed by a ruined bridge, a group of peasants - women, men, old, young, children - share, for want of more, the few beds, the little wine and the little food they have. The land belongs to the Marquise and they work for her in the tobacco plantation. Until, from afar, unseen, the end of these times arrives. 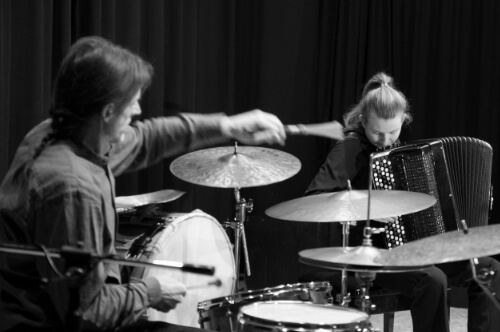 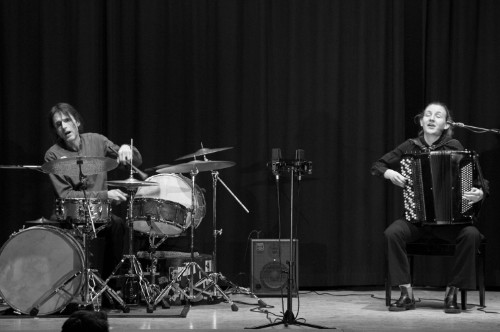 The duo was formed back in 2011 when Maria Dafka was 13 years old. From the beginning, their sound was deeply influenced by the Macedonian tradition. Over the years, their repertoire has expanded to include Doneff's own compositions, into which he selectively stirs his favorite Balkan rooted spices.

Festive rhythms and melodies blend with lyrical ballads on new arrangements, including open improvisation with a modern approach, whereby virtuosity emerges as a natural element.

In 2018 the duo was awarded the World Music Prize RUTH (for their) “innovative compositions and improvisations”. 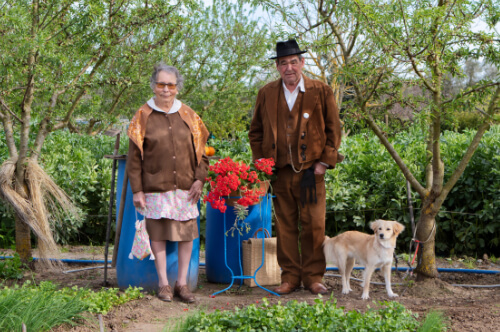 The Choir Group "Os Rurais" from Figueira dos Cavaleiros was founded in 1976, being, therefore, one of the oldest choirs of Cante Alentejano in the world.

In 2002 female voices were incorporated into the group thus creating other tonalities and modulations, always maintaining the singularity and distinct identity characteristic of Figueira dos Cavaleiros, which interested Michel Giacometti so much. After some tough and even fatal years for many choral groups in the Baixo Alentejo, "Os Rurais" once again prove their tenacity by taking the stage to take us on a real journey through the polyphony of the Alentejo. 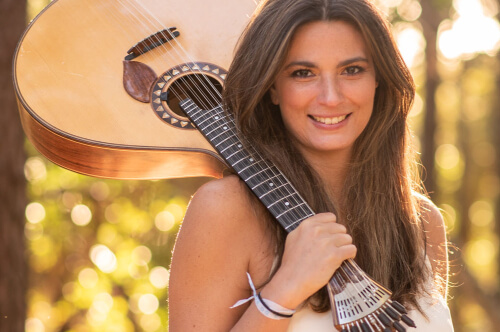 Distinguished guitarist and authentic ambassador instrumentalist, Marta Pereira da Costa, brings her strength and sensibility to her encounter with the Cante do Imaterial. With her guitar she makes a journey through the traditional sounds of fado and Portuguese music, and in her wide versatility, she makes delicate and dynamic incursions into the Brazilian chorinho, the Cape Verdean morna and world music.

During the week preceding the festival, Marta Pereira da Costa will be in artistic residence to weave musical complicity with the male voices of Ferreira do Alentejo. The Cante of the Choral Group Os Boinas together with this great Portuguese guitar will only make for a great evening of exciting and unique beauty. 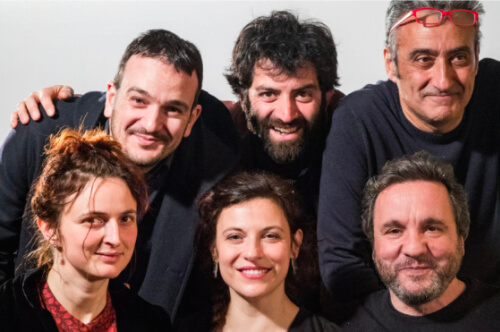 From the folk and gypsy sounds of the accordion, to the slides of the guitar and trombone, this band proposes an ironic and poetic atmosphere from their authorial suaveness to their Italian light music. 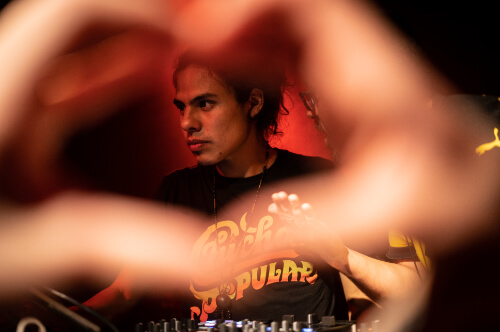 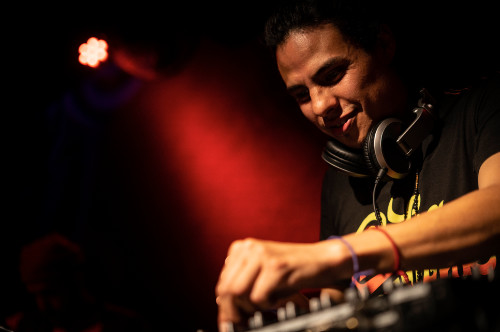 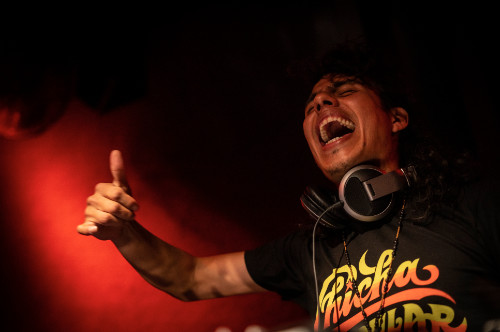 The mixture of autochthonous Mexican roots with popular Latin American feelings mark the musical and "bailanguera" proposal of Ritmos Cholulteka. With cumbia in the heart and soul, plus the motto of deep and energetic sound sharing, a sound interaction with the audience is celebrated, in a festive space of intercultural rhythms, electronic beats and Balkan and African sounds.